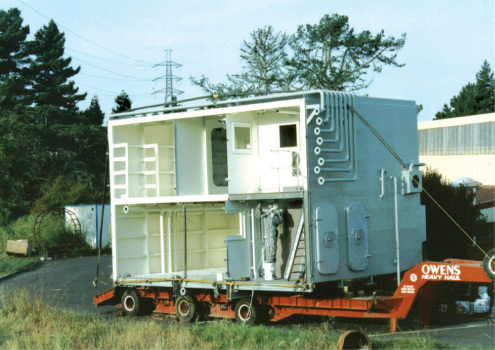 Contracted to Robt Stones, for the NZ Navy, Crusader constructed the Navies Frigate Simulator. This Simulator was 10m x 7m x 6.5m weighing in at over 100 Tonnes. Full size section of frigate incorporating three decks, hatchways, piping systematic to warship standards, all mounted on trunnions and capable of being hydraulically ‘rocked’ to simulate sea movement.

Module incorporated 64 ‘damage’ points, ie damage points simulating rocket, shell bursts, split seams and the like. Each damage point had plenum chamber behind through which smoke and water could be pumped from central control room, for realistic war damage training under sea conditions.

The module was so large that the end wall of the workshops was removed to allow its removal and loading onto transporters. A complex project built in twelve weeks, working around the clock, to high quality assurance standards, finished on time, and on budget.